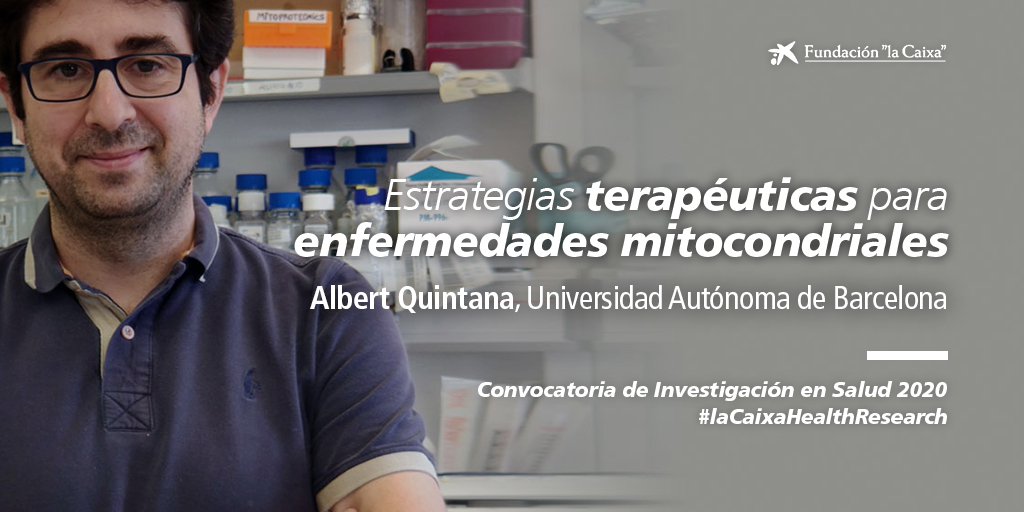 We are very happy to announce we have been selected to receive a grant from La Caixa Foundation to investigate new therapies for mitochondrial disease! It has been a very competitive process, in which only 8 projects were selected out over 150 proposals, so we have some cava in the fridge!

Our project will focus on studying the alterations that occur in a specific area of ​​the brain, the basal ganglia, in mitochondrial pathologies. We suspect that these alterations are caused by signals initiated in the mitochondria that drive cells to their death. Thanks to the funding from La Caixa Foundation (500,000 euros in 3 years), we will investigate how to reverse these signals and look for new therapies.

What was last Saturday’s day number? Yes, it was the 4th of July. What happens on every 4th of July? Yes, we celebrate a BBQ to commemorate the United States’ Independence Declaration. O say, can you see by the dawn’s early light…  You can tell we miss Seattle 😀

We went to El Bosc Tancat, in Cerdanyola, with our cars full of hot dogs, burgers (+ veggie burgers), chorizo, chicken, omelettes, beers, and a bit of sadness, as it was Fab’s farewell as well.

Marco and Adan were the BBQ chefs, and Fab was in charge of them having enough drinks. They did an excellent job, as the food was de-li-ci-ous. Isabella brought this almost-non-alcoholic potion they drink in Serbia, rakija, to help the food disintegrate in the guts.

After the lunch, we gave Fab some presents, such as a magnific apron he is committed to wear every time he cooks Spanish food:

Then, some dared into the swimmingpool to have an afternoon bath and show how tanned they got during lock-down:

What a pleasure to be part of this group of amazing people! <3

We have been told about this great project, Mitowomen, which is a database to make the women working on mitochondria research more visible. The aim is to create a network for collaboration and to boost women representation on editorial boards, as keynote speakers in conferences, in invited special issues, as reviewers, on grant funding panels or as expert researchers for media consultation or interviews.
As it is such a great initiative, we wanted to share it with you! Check their website out and follow them on Twitter.
Sticky Post By Roser Bastida Posted in Public engagement, Uncategorized With No Comments Permalink

The UAB communications team made a super cool video about our research in Leigh Syndrome (thank you very much!). Yay! Albert is almost a star!

We will never be tired of spreading the word in mitochondrial diseases and explain the research we are carrying out in the lab:

At the beginning of the month, the Institut de Neurociències celebrated its 7th Scientific Conferences, and we were -obviously- there!

The event was held in Sant Feliu de Guíxols, by the sea, in the nicest hotel, and gathered together more than 120 students and institute members. 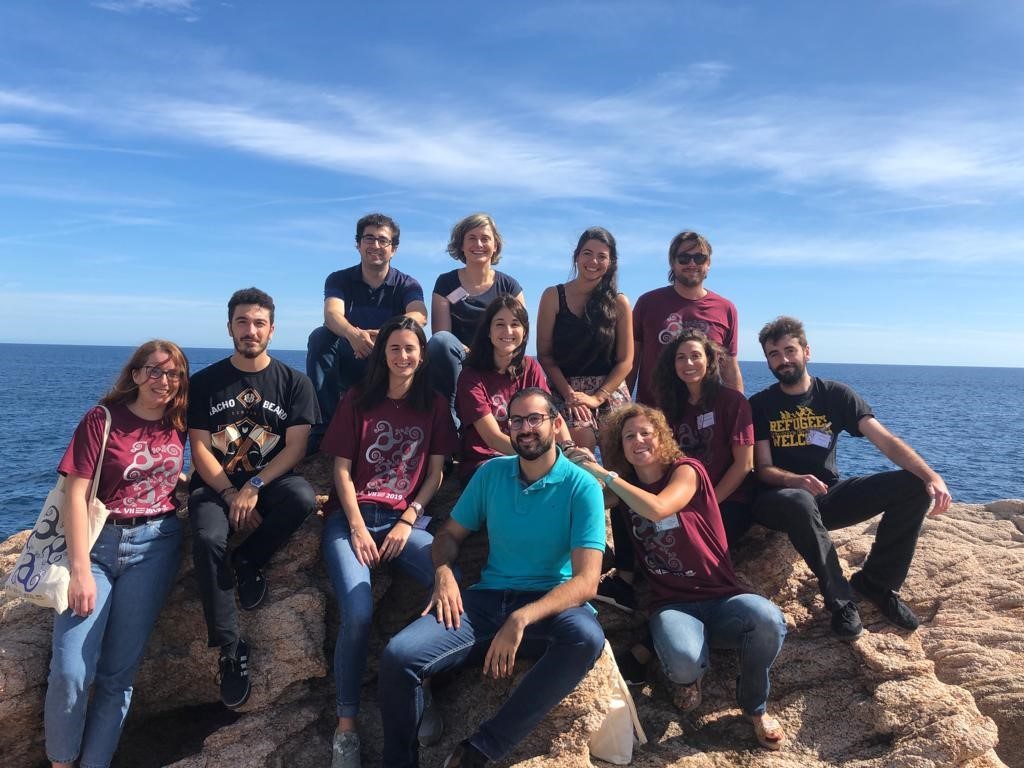 Albert was the conference coordinator and worked very hard for everything to be perfect.

There were more than 30 talks, poster sessions and time for having fun, as well:

(Please, take your time to observe this picture of the costume contest, don’t miss any details…)

Several members of the group participated in the conferences: Elisenda gave a talk on the first day regarding new techniques we are using, Patrizia explained the research she is currently carrying out, and Emma chaired a scientific session. Also, Andrea, Laura, Pablo, Pati and Patrizia presented a poster. 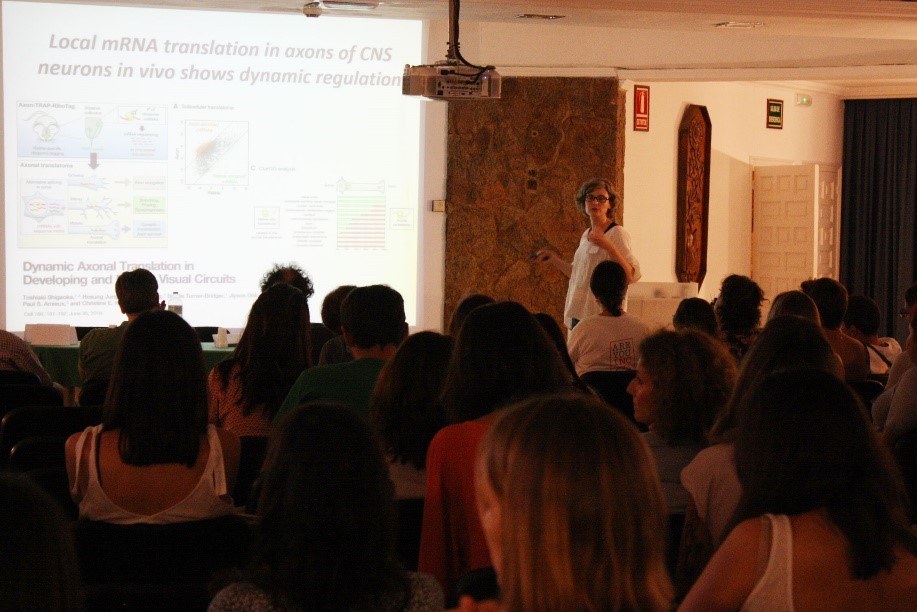 On the fun side, Abel organized an amazing trivia game, on the first night, that Laura’s team won. Pablo’s team won the costume contest, dressing as Disney characters; and Albert and Eli won the partying contest, almost closing the disco.

They were great days with great people! Already looking forward next year’s edition!

We are very glad to announce that our MitoCBD project has been selected for a CaixaImpulse grant.

MitoCBD consists in investigating the use of Cannabidiol (CBD), a substance obtained from the cannabis plant, for the treatment of mitochondrial disease.

It has been proved that CBD has anti-inflammatory and neuroprotective properties, and it was also found to restore deficits and prolong life expectancy in a mitochondrial disease model.

The aim of this project is to test the effectiveness of the CBD in other preclinical models of mitochondrial disease, with the final objective of finding a treatment for these devastating rare diseases.

There has only been 21 projects selected from all around the UE, so we are veeeery happy that MitoCBD is one of them!

We published our first preprint last week. For those who aren’t familiarized, a preprint is a study to be published in a Journal, that has not been reviewed yet. The aim is to make the results available as soon as possible so Science can advance faster. We are very excited about it, and very happy because it has been featured by the preprint platform Biorxiv for reaching the top 5% altmetric score within their first days after releasing it; and it has also been selected as one of the ERC Research results of the week! So cool!

But what is it about?

As you may know, dysfunctions of the mitochondrial energy-generating machinery cause a series of usually fatal diseases collectively known as mitochondrial disease. In this disease, high energy-requiring organs, like the brain, are especially affected, showing many severe symptoms such as motor alterations, respiratory deficits or epilepsy that, in many cases, can be fatal. Hence, our group is driven to better understand these pathologies, with the overarching goal of finding effective therapies to treat them.

This time, we focused on Leigh Syndrome, the most common presentation of mitochondrial disease with a predominant affectation of the central nervous system, particularly in two brain areas, the brainstem (that controls all basic functions that keep us alive) and the basal ganglia, involved in refining motor coordination. We knew that one protein in the mitochondria is critical in this disease: the Complex I subunit NDUFS4, because animal models lacking this subunit in all their cells reproduce the classical signs of Leigh Syndrome described before. However, there were some pressing questions remaining: do symptoms appear due to all cells in the body not working properly, or some specific cells are responsible for them?

To study this, we selectively inactivate NDUFS4 in three neuronal populations we suspected could be key, and keep NDUFS4 working in all other cells in the body. Observing what symptoms remained we could know the role of these neurons in the brain alterations these patients suffer.

What we found was that the inactivation of this subunit in a certain kind of excitatory neurons (the fancy-scientist name is vlgut2-expression glutamatergic neurons) caused brainstem inflammation, motor and respiratory deficits, and early death; and that its inactivation in inhibitory (GABAergic neurons) led to basal ganglia inflammation, severe refractory epileptic seizures and premature death. 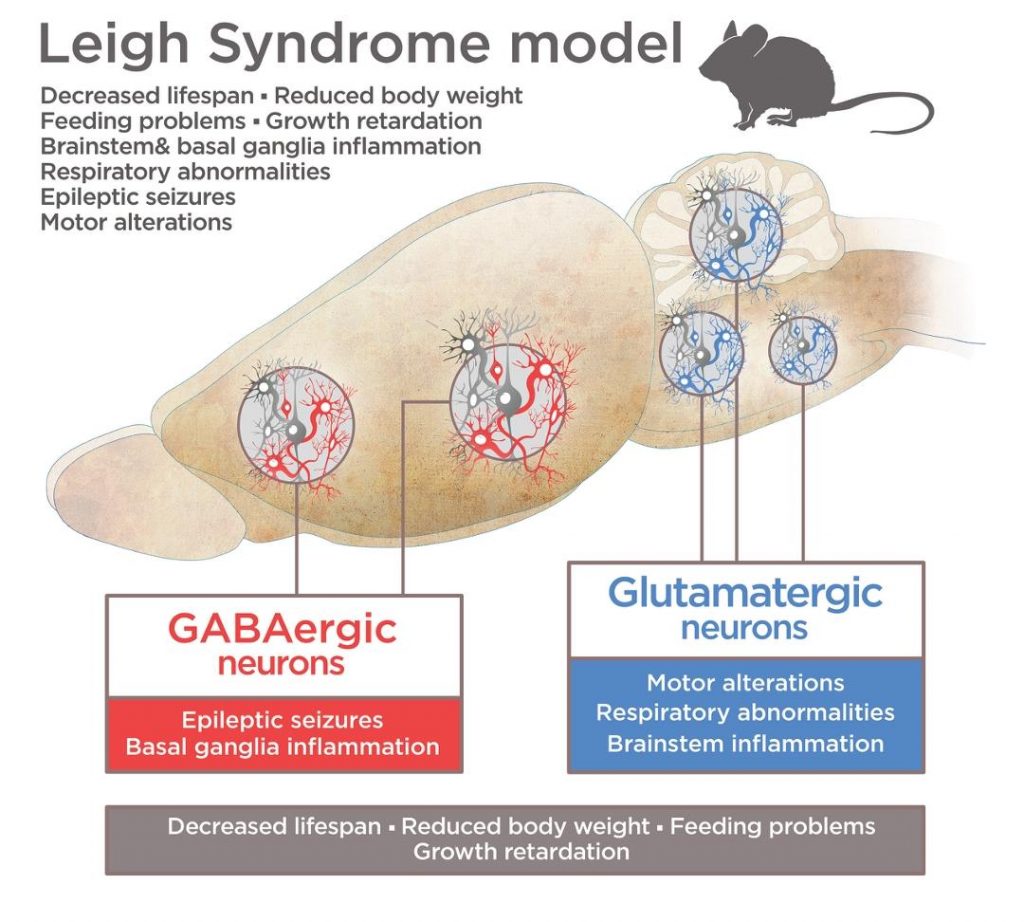 Bottom line, these results are very important to contribute understand the underlying cellular mechanisms of mitochondrial disease in general, and Leigh Syndrome in particular, as we have identified which specific neurons are behind the brain lesions observed in this pathology and their specific contribution to the symptoms. Therefore, now we have new knowledge to try to identify which cellular aspects are failing in those cells so we can start to envisage different methods to correct them. 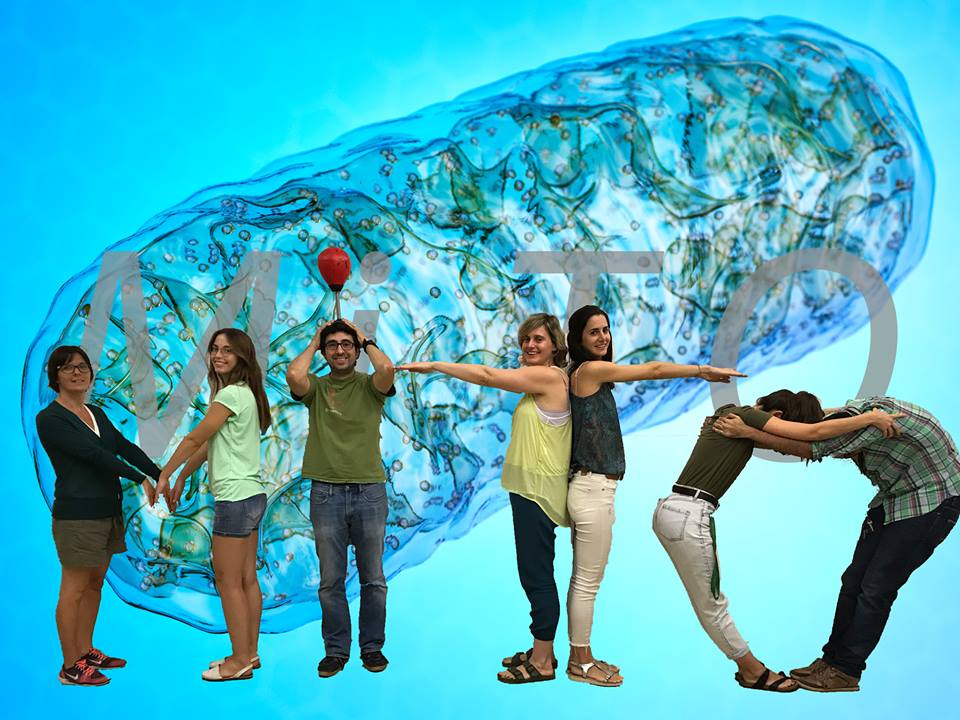 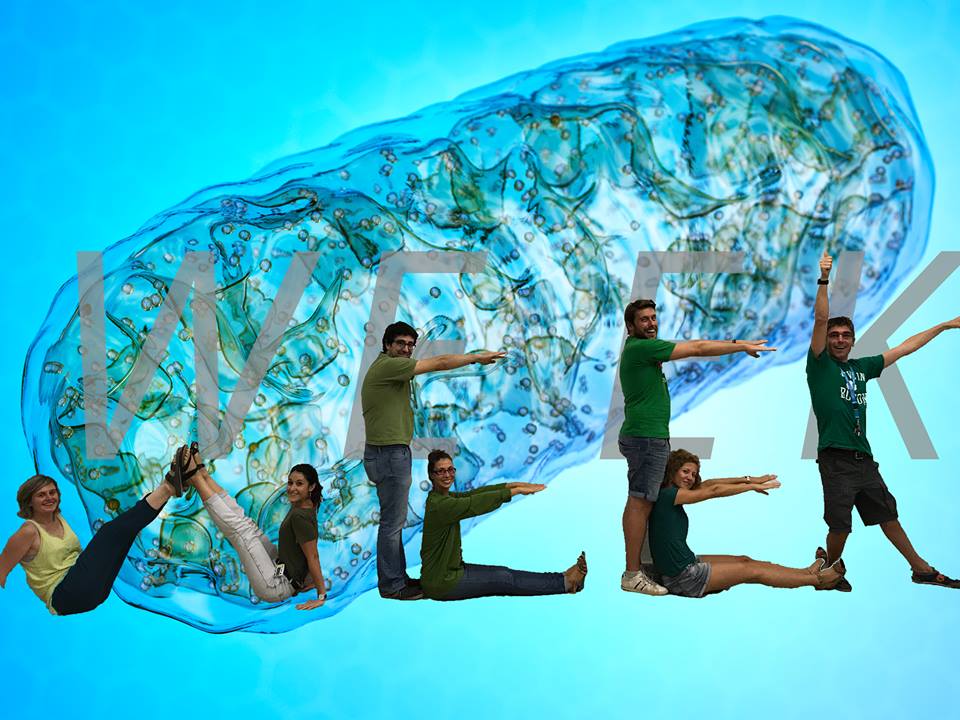 Last week, the Quintana lab attended the 1st European PhD and Postdoc Symposium held in the beautiful, Pompeian Style, Palauet Casades in Barcelona, Spain. The international event was possible through the ENABLE (European Academy for Biomedical Science) initiative, part of the European Union Horizon 2020, for young researchers in Life Sciences. It was a very successful initiative with more than 250 participants of 26 different countries. 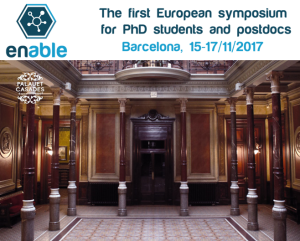 The 3-day symposium was (amazingly!!) organized by PhD students and Postdocs from four European centers, and was aimed at promoting excellence in the Biomedical Sciences in Europe as well as at fostering collaborations with industry and engagement with society. In addition to the outstanding scientific lectures, we could benefit from the top-level Masterclasses given by established researchers as well as the informal Career Chats with professionals, to learn about different career paths outside the bench. We also enjoyed the interesting Workshops on useful topics such as “Setting Goals & Time Management”, “Intellectual Property” or “Science Communication and Public engagement”.

It has been a very inspiring event… and Pati and Pablo could also show our latest research advances!! 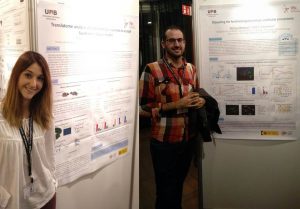 Now the torch has been passed…we are looking forward the next vibrant ENABLE symposium in Copenhagen 2018!! 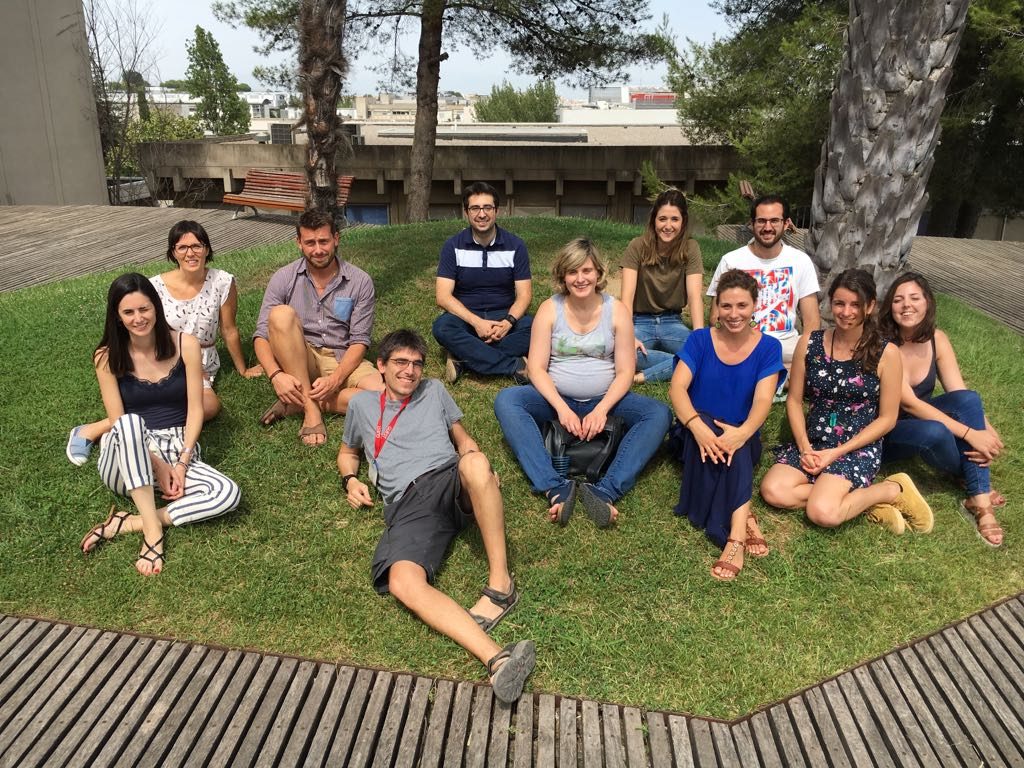